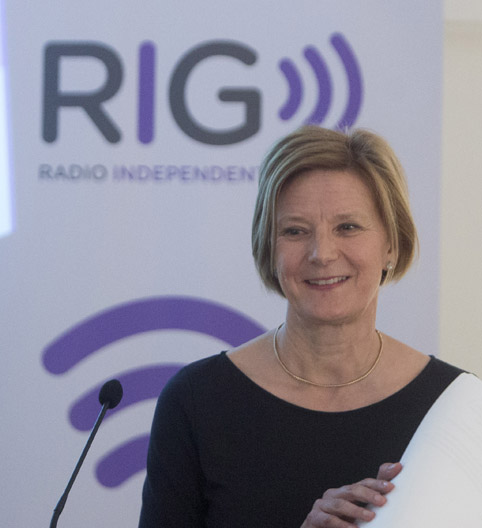 In her keynote speech to our AGM on June 25, Helen Boaden outlined such major changes to commissioning programmes for radio that we reproduce the whole BBC press release here:
(fuller AGM report to be posted shortly; picture: Nick Edwards Photography)

Under the proposals – which follow lengthy negotiations between the BBC and trade body RIG – the BBC would open up almost 60 per cent of eligible network radio hours to competition from independent companies within six years – triple the current total of 20 per cent.

Addressing the RIG AGM, Helen explained that the amount of output the UK radio indies could win would increase threefold, from the current 9,000 hours to around 27,000 hours at the end of the six-year period. She also pointed out that eligible hours are subject to change as schedules evolve in response to audience demand and budget constraints.

Describing it as “by some distance the greatest intervention in content production in the history of our sector,” she explained how the move presents the UK independent community with “an unprecedented opportunity” to grow and how individual companies could “make a step-change in their scale”.

However, she cautioned; “This will be genuine competition, not a promise that everything put out to competition will be won by an Indie. Just like in-house, you may win some of the new commissions and lose others. In-house may win more than you. There are no guarantees, other than we will provide a robust and fair system for competition.”

Putting around 60 per cent of eligible hours up for competition would offer indies more opportunities to make programmes across the BBC network radio portfolio – Radios 1, 1Xtra, 2, 3, 4, 4 Extra, 5 live, 6 Music and the Asian Network. This includes the expectation that, after six years, every programme on Radio 6 Music will have been opened up to competition.

The remainder of eligible hours – when putting out to competition offers little or no value – would be made in-house and go through a process of external comparison. This would include talent-led daytime output on Radio 1 and Radio 2 in which the music is centrally controlled and core to the programme, and a small number of long-running titles on Radio 4, including The Archers, Woman’s Hour and Desert Island Discs, which are unlikely to be refreshed in the foreseeable future.

The proposal would be subject to approval from the BBC Executive and BBC Trust, and on funding from existing BBC budgets.

BBC Radio currently operates a 10 per cent indie quota alongside a 10 per cent Window of Creative Competition. The new approach would result in the phasing out of the quota over the same six-year period.

BBC Director-General Tony Hall launched the Compete or Compare strategy last year, saying the BBC would go further than ever before in using direct competition and external comparisons to drive up standards and drive down costs.

Helen Boaden said: “The BBC is in another great period of reform. There is no clearer sign of this than our Compete or Compare strategy. We know we have to demonstrate to the outside world that we spend public money wisely and effectively. For me, there is a broadcasting ecology which works best when we have in-house and independent production working in creative tension.

“What we’re proposing is to create a more competitive radio production market in which the BBC commissions the best ideas, regardless of where they come from. The ultimate aim of what we’re doing is to give even greater creative and financial value to our audiences. But I also think our proposals will benefit the creative economy.

“I would like to thank the RIG board and my station Controllers again for engaging so wholeheartedly. I’ve no doubt there will be obstacles as we work through the plans but, if we maintain our collaborative approach, I’m confident we can make sure BBC Radio remains the best in the world.”

Phil Critchlow, Chairman of RIG, said: “We greatly welcome the bold steps Helen has outlined at our AGM today to open up more of the radio schedules to competition from independent producers, large and small, and based across the UK.

“The evidence from recent independent analyses of the sector strongly suggests change, and we’re pleased that both parties have proposed that this is the right way forward.

“We’ll now be continuing the dialogue with our members, the BBC executive and the Trust to help ensure that these proposals become a reality, and in so doing, better enable the best ideas to be commissioned, regardless of source, for the benefit of the licence fee payer.”

The plan would require a restructuring of BBC Radio’s commissioning process and Helen warned that, while the BBC hopes to save money in the medium to long-term, the proposals would present significant financial challenges in the short-term.

Full speech can be found here.

In line with the BBC’s wider Compete or Compare strategy, Daily news output, weather, repeats, EBU broadcasts and coverage of State occasions are not included in eligible hours.